Levocetrizen 5mg Tablet belongs to a group of medicines called antihistamines. It is used to treat various allergic conditions such as hay fever, conjunctivitis, some skin reactions such as eczema, hives, and reactions to bites and stings. It also relieves watery eyes, runny nose, sneezing, and itching.

levocetrizen 5mg Tablet can be taken with or without food. The dose required by you may vary depending on what you are taking it for. This medicine is usually taken in the evening, but follow the advice of your doctor on how to take it. You may need this medicine only on days you have symptoms, but if you are taking it to prevent the symptoms then you should take it regularly. If you miss doses or stop taking it earlier than advised, your symptoms may come back.

This medicine is generally very safe. The most common side effects include feeling sleepy or dizzy, dry mouth, fatigue, and headache. These are usually mild and go away after a couple of days as your body adjusts to it. Consult your doctor if any of the side effects persist or worry you.

Before taking it, tell your doctor if you have any kidney problems or epilepsy (seizures). Your dose may need to be modified or this medicine may not suit you. Some other medicines can interact with this medicine so let your healthcare team know what else you are taking. You should also talk to your doctor before using this medicine if you are pregnant or breastfeeding, although it is not thought to be harmful. 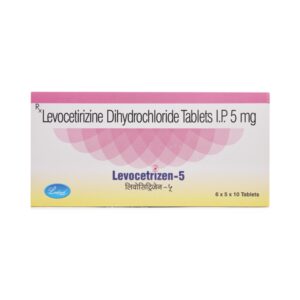 Allergic rhinitis, often known as hay fever, is a common disease that arises as a result of the body’s response to external factors such as allergens. The body’s defence system (immune system) produces a response by releasing antibodies to the allergens or foreign substances. Allergens are usually harmless and may cause a minimal allergic response in the body. Levocetirizine is used to relieve allergic symptoms or responses produced in your body due to allergic rhinitis.

Urticaria or hives are itchy rashes that are found on the skin. It is triggered by an allergic reaction to food, medicines (like some antibiotics, non-steroidal anti-inflammatory medicines such as aspirin, high blood pressure medicines such as captopril) or other irritants in the environment. Levocetirizine is used to treat symptoms of urticaria like itchy skin, swelling. redness, etc.

In Treatment of Allergic conditions
levocetrizen 5mg tablet provides relief from symptoms such as blocked or runny nose, sneezing, and itchy or watery eyes. This will make it easier for you to go about your daily activities. It can also give relief from allergic reactions after insect bites and symptoms of hives and eczema such as rash, swelling, itching, and irritation. This will improve the appearance of your skin and you may find that your mood and self-confidence improve as well. It rarely has any serious side effects and you may only need to take it on days you have symptoms. Moreover, Levocetrizen 5mg Tablet may make you feel less sleepy as compared to other antihistamine medicines. If you are taking it to prevent getting symptoms you should use it regularly to get the most benefit.

SIDE EFFECTS OF LEVOCETRIZEN TABLET

Most side effects do not require any medical attention and disappear as your body adjusts to the medicine. Consult your doctor if they persist or if you’re worried about them

Common side effects of Levocetrizen

HOW TO MANAGE SIDE EFFECTS

Get up and move around to feel awake, take small naps to edge off the sleepiness. Give your eyes a break to avoid fatigue and eat a healthy food to boost energy.

Apply hot or cold-water bag on your head. Take rest in a quiet and dark room. Drink tea or coffee.

Drink lot of fluid such as water or squash, to avoid dehydration. Do not take any other medicines without talking to a doctor.

Try taking this medicine with, or just after, a meal or snack and stick to simple meals and do not eat rich or spicy food.

HOW TO USE LEVOCETRIZEN TABLET

Take this medicine in the dose and duration as advised by your doctor. Swallow it as a whole. Do not chew, crush or break it. levocetrizen 5mg Tablet may be taken with or without food, but it is better to take it at a fixed time.

LEVOCETRIZEN 5MG works by blocking the effects of histamine, which may be overproduced in allergic reactions which causes unpleasant symptoms such as itchy or watery eyes, running or blocked nose, sneezing and skin rashes.

Always take LEVOCETRIZEN 5MG exactly as your doctor has told you. This medicine must be taken with or without food. Try to take this medicine at the same time each day. It should be swallowed whole with water. Do not crush or chew the medicine.

WHAT IF YOU FORGET TO TAKE LEVOCETRIZEN TABLET?

If you miss a dose of Levocetrizen 5mg Tablet, take it as soon as possible. However, if it is almost time for your next dose, skip the missed dose and go back to your regular schedule. Do not double the dose.

LEVOCETRIZEN 5MG is not recommended for use in pregnant women unless necessary. Discuss the risks and benefits with your doctor.

levocetrizen 5mg is not recommended for use in breastfeeding women unless necessary. Discuss the risks and benefits with your doctor.

Do not drive or operate machinery while taking this medicine, since it may cause drowsiness.

Consumption of alcohol is not recommended during treatment with LEVOCETRIZEN 5MG.

LEVOCETRIZEN 5MG should be used with caution in patients suffering from liver function impairment or active liver diseases. Consult your doctor for advice.

Do not take LEVOCETRIZEN 5MG if you are allergic (hypersensitive) to cetirizine or any other ingredients in this medicine.

Tell your doctor if you have or had a condition such as, 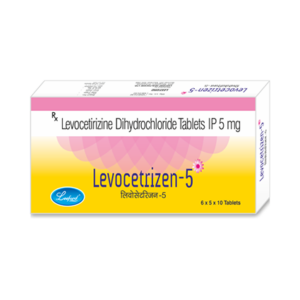 Store below 20-25°C and keep out of reach of children.

Your doctor has prescribed Levocetrizen 5mg Tablet to help relieve allergy symptoms such as itching, swelling, and rashes.
As compared to other similar medications, it is much less likely to make you feel sleepy.
Be cautious while driving or doing anything that requires concentration as it can cause dizziness and sleepiness.
Do not drink alcohol while taking this medication as it may cause increased sleepiness.
Stop taking Levocetrizen 5mg Tablet at least three days before taking an allergy test as it can affect the test results.

No, this medicine does not influence the immune response.

Can LEVOCETRIZEN 5MG cause dizziness?

Yes, this medicine may cause dizziness in some individuals. Get up and move around to feel awake, take small naps to edge off the sleepiness. Give your eyes a break to avoid fatigue and eat a healthy food to boost energy.

Can I take LEVOCETRIZEN 5MG during breast feeding?

No, it can pass into breast milk. It is not recommended for use in breastfeeding women unless necessary. Discuss the risks and benefits with your doctor.

Be the first to review “LEVOCETRIZEN 5mg Tablet” Cancel reply